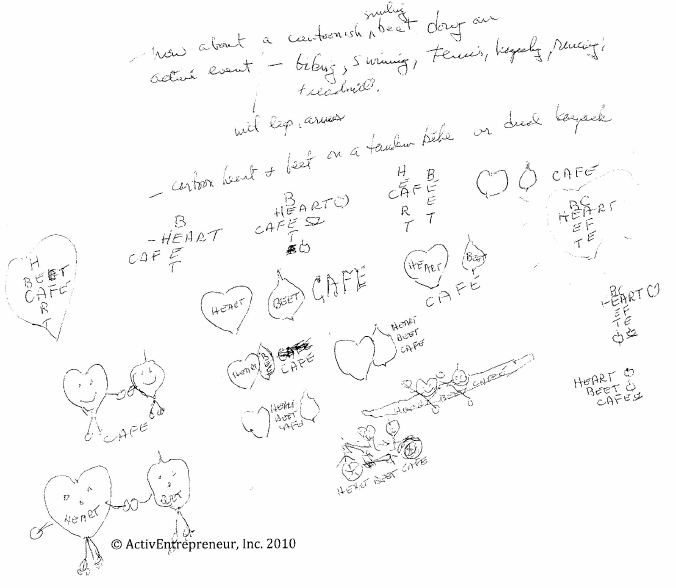 In 2010, I contemplated opening up a healthy, organic cafe that focused on educating and feeding families and kids healthy AND recognizable meals.  The cafe would inspire both activity and healthy eating.  I had a clear vision about how it would look and where it would be located.  But I didn’t know what to call it.  During one of my morning walks with my friend Diane, we were brainstorming different vegetables, fruits and herbs for the cafe name but they were all lacking the activity and energy inspiration. Then Diane mentioned the word ‘heartbeat’.  I literally stopped walking.  That was it – that was the name!  I would use HeartBeet, but ‘beat’ would be spelled like the root vegetable ‘beet’ instead!  The name HeartBeet Cafe became official!

I pursued the cafe but soon realized that the timing was just not right.  However, there was still a need for the education component, especially in the schools.  HeartBeet Cafe was not ready to be a brick and mortar cafe but it was a virtual cafe that would bring nutrition education to school cafeterias. 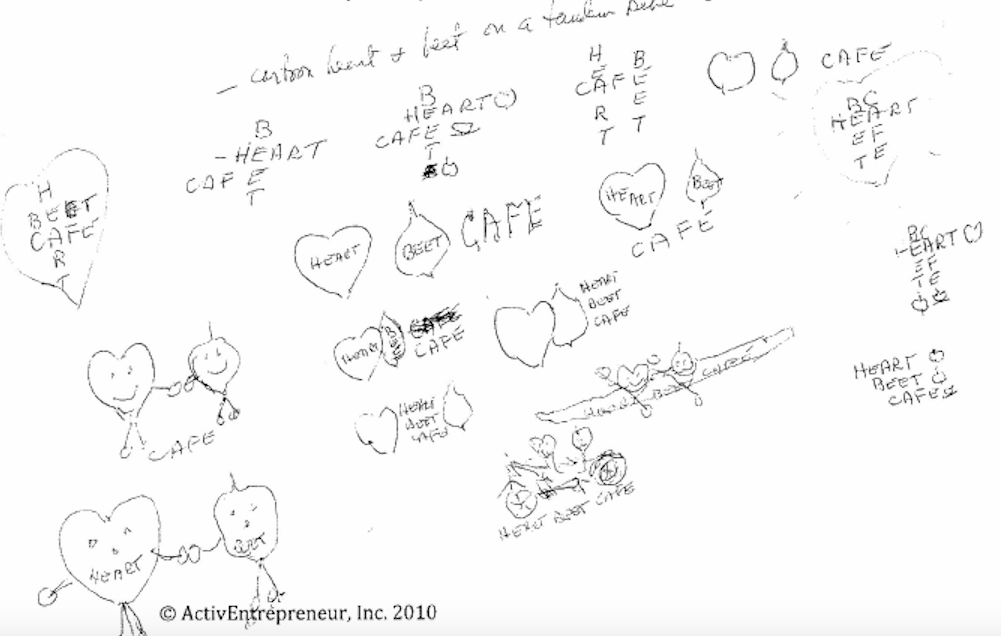 I set out to develop a logo to represent HeartBeet Cafe.  I met with my buddy and long time friend Tim for lunch one day and started talking about the logo and what I wanted it to convey.  It needed to convey energy, activity and nutrition all at the same time. Tim started doodling 2 characters on a napkin. One was a Heart and one was a Beet.  And then he started creating active scenes with Heart and Beet – Heart and Beet were kayaking and biking.  All of a sudden these characters, Heart and Beet, came alive and became the teachers of our nutrition program.

I gave these rough designs to Alexander Young, the 11-year old son of a good 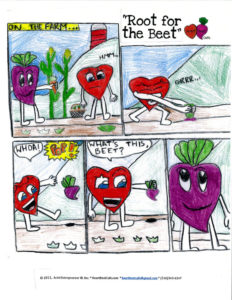 friend of mine.  Alexander loved to draw cartoons.  I handed him the napkin doodles and he created the detailed Heart and Beet character images.  In addition, he mocked up a logo using the Heart and Beet image similar to what Tim drew on the napkin using a Heart and Beet.  With the help of a small team including Elizabeth, Alex, and Tim, I finalized a series of comic scripts focused on teaching kids how to make healthier food and drink choices. Alex drew each of the comics based on the scripts we provided.

While we were finishing the comics, I brought Alex’s logo design and characters 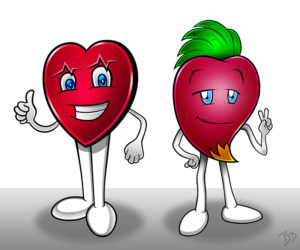 to a graphic designer to create the digital images of the logo and characters.
They played with the images a bit and came up with some variations of the characters.  Here is one version that did not make the cut!  They looked like the ‘evil’ version of Heart and Beet and may have scared the kids away forever!

We now had a digital logo and images of the characters and we had completed 12 comics!  We 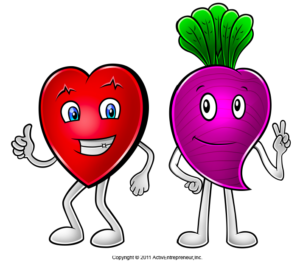 were ready to promote and teach.  We visited several school cafeterias in Long Island and, using our comics and characters, were very effective in making an impact on kids and their food and drink choices.

We digitized 3 of the comics into actual cartoons. Heart & Beet Go Organic, Root for the Beet, and Making a Sweet Splash all became actual cartoons. My son became Heart’s voice and my daughter Anna became Beet’s voice.

In our next phase of HeartBeet Cafe and Heart and Beet, we now have a farm – HeartBeet Farms.  The same nutritional messages and themes apply and we are still teaching families and kids about how to make healthier choices.  Heart and Beet are also coming out of the comics and cartoons and becoming real-live mascots!  And one day HeartBeet Cafe will also become a reality!!