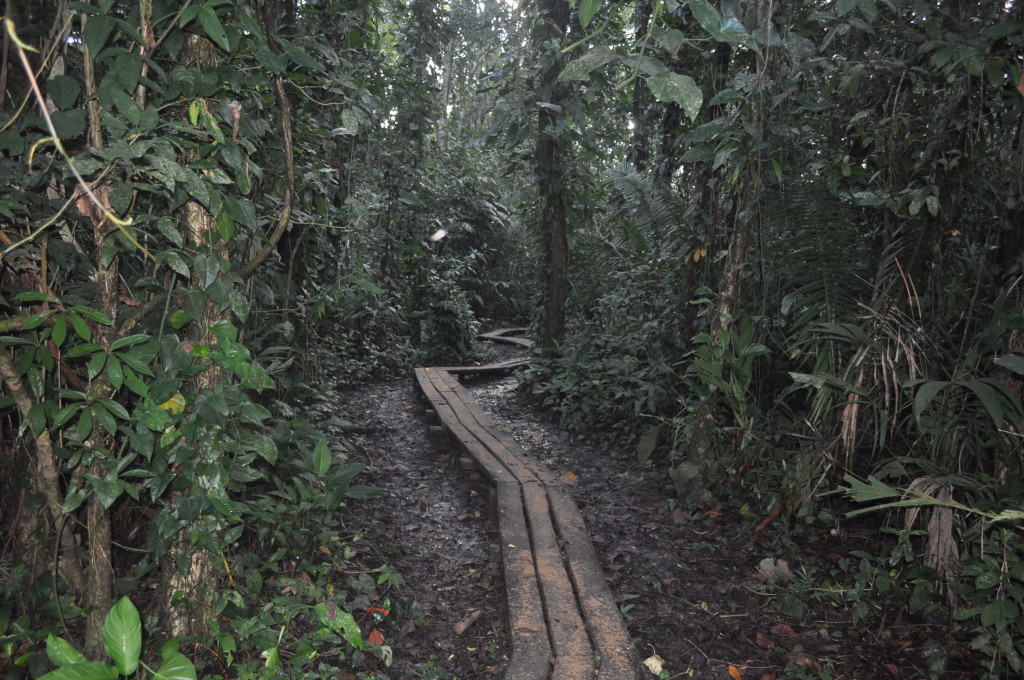 It was February 2014 and I left New York in a blizzard, arriving one day early for my chocolate tour in Belize. Our group was staying at the Cotton Tree Lodge in Punta Gorda, Belize.  The hotel was very rustic, located right by the Moho River, surrounded by jungles.

All of our meals were served in the main lodge area.  While eating dinner with some of the other guests, the hotel offered me an upgrade to the jungle cabana for the first night, until joining the rest of the chocolate tour guests.  I hesitated a few moments. I had reviewed the hotel website prior to arriving and recalled reading about the infamous Jungle Cabana, located a quarter of a mile in the jungle, away from the other cabanas. Although I was extremely hesitant spending my first night in Belize alone in the middle of the jungle,  I accepted the upgrade.  I figured that this was a once-in-a-lifetime experience to spend a night alone in the jungles of Belize – what the heck!!!

Heading to the Jungle Cabana

It was getting dark.  One of the hotel workers got me a flashlight and escorted me to the jungle cabana.  It was a lengthy walk down a small trail that headed into the jungle.  The cabana resembled a tree house in the jungle.

When entering the front door, the bathroom was downstairs.  Everything was open air, a simple screen separating you from the jungle throughout the entire cabana.  Heading upstairs there was a bed with a light above it and netting covering the bed.  Netting was common to help keep the bugs away.

The hotel worker checked the jungle cabana for tarantulas and any other unwelcomed critters.  Thankfully, there were none!  He also handed me a walkie talkie to use in case of an emergency as my cell phone had no coverage and there was no phone in the cabana.

The hotel worker left.  I was alone…in the dark…ready to spend my first night in Belize in the middle of the jungle!  It was all good!!

I washed up quickly in the bathroom downstairs.  My eyes were scanning the floor and walls for any critters.  The whole tarantula thing was pretty unnerving.  I organized the bed and ensured that  I had everything I needed on the bed, inside the netting including my walkie talkie, water, book, and flashlight!  I left the light above the bed on and began to read my book.  It was about 10PM and the jungle was peaceful.

After reading for about 15 minutes, I heard a noise in the jungle, sort of like something moving through the jungle, towards the cabana.  The movement started getting closer to the cabana and then the noises started.  It was like a scene from Jurassic Park, velociraptors moving through the jungle. And then I heard a growling noise that was approaching the cabana and getting louder and louder.  I quickly reached up and put out the light above my bed.  I felt like a sitting duck with a light on in the middle of the jungle.  I put my head under the covers.  My heart was beating out of my chest.  I never felt so afraid in my entire life.  Why did I accept the upgrade to the jungle cabana??  The growls were right above my cabana. They were loud and frightening and were not going away.

Jurassic Park was the only way to describe it.  While trying to calm myself down under the covers, I recalled reading about some monkeys and also recalled a conversation during dinner about howler monkeys.  But no one told me that the monkeys sounded like velociraptors from Jurassic Park.  I figured they sounded like regular monkeys, not dinosaurs!!  I realized that these must be the howler monkeys.  I was a little relieved to know that these were the infamous monkeys.  But I was annoyed that no one warned me.  I think they set me up!!!

After about 30 minutes or so, the howler monkeys started moving away from the jungle cabana.  My heart rate started decreasing and I was able to get a little bit of sleep.  Although I think I ended up sleeping under the covers the entire night!

I awoke at dawn and very much welcomed the sunlight that was poking through the jungle.  While getting ready and organized in the morning, I realized that I had some other critters living in the cabana with me….bats!!  They were outside in the very top of the cabana, just hanging out.  They were nothing compared to the sounds of the howler monkeys!

As soon as it was light enough, I gathered my luggage and made my way along the path towards civilization.  I don’t regret spending the night alone in the jungle cabana. It was truly an experience of a lifetime and makes for a great story.  But, it was one of the most terrifying experiences of my life!!!  If you don’t believe me, listen to this video and you can see why Jurassic Park velociraptors come to mind when hearing the Belizean howler monkeys!!  And then imagine yourself in the jungle, in
the dark, alone, in an open-air cabana with howler monkeys right outside!!  Enjoy!

Make it a great Monday 🌻😎

We will have freshly roasted, local corn at Thursd

TODAY Is Farmers Market Day at Stony Brook Hospital. Preorder at heartbeetfarms.com/stonybrook. This Thursday only, HeartBeet Farms is out of town and will have a limited selection of produce. All market options are listed on the preorder form. Stop by to check us out! Next week all vendors will be back PLUS we have a special Chef visit planned for the day!
…