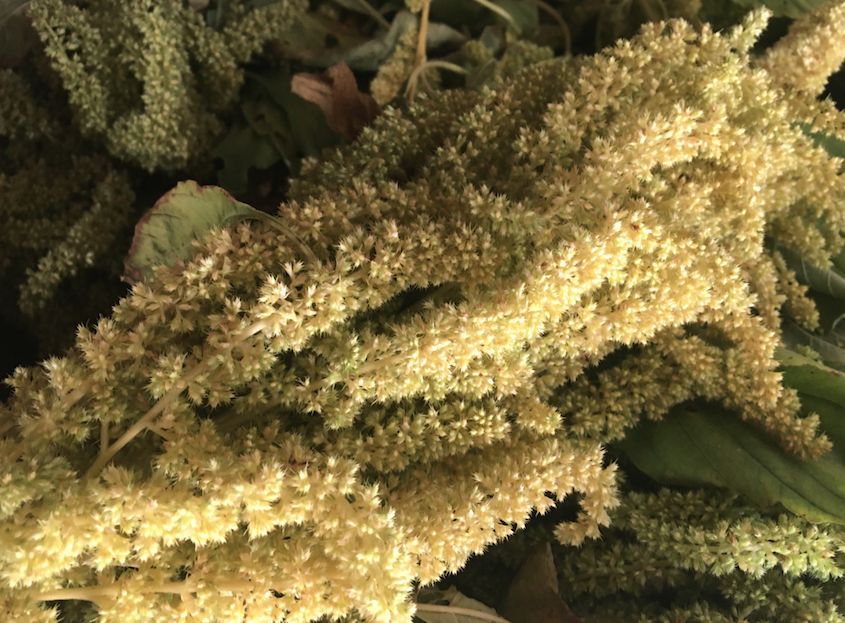 Amaranth is a group of more than 60 different species of grains. Some call Amaranth a seed vs. a grain. Amaranth is typically a very tall plant with broad green leaves and bright purple, red, or gold ﬂowers. There are three species of amaranth that are grown for their edible seeds including: Amaranthus cruenus, Amaranthus hypochondriacus, and Amaranthus caudatus.

Is Amaranth a Cereal?

Amaranth is classified as a pseudocereal. It is not a cereal grain like wheat or oats, but it shares a comparable set of nutrients and is used in similar ways. Amaranth’s earthy, nutty flavor works well in a variety of dishes. Amaranth is can be used as a leaf vegetable, cereal, or ornamental plant.

The History of Amaranth

Amaranth grains were a staple food for the Inca, Maya and Aztec civilizations. Amaranth has a long history in Mexico and is considered a native crop in Peru.  Amaranth was a major food crop of the Aztecs. Amaranth is believed to have been domesticated about 6,000 to 8,000 years ago.  The Aztecs didn’t just grow and eat amaranth. They also used the grains as part of their religious practices.  Many ceremonies would include the creation of a deity’s image that had been made from a combination of amaranth grains and honey.

Today, in many South American countries, you can ﬁnd amaranth sold on the streets, most often having been popped like corn.  In India, Mexico, Nepal, and Peru, it’s a traditional ingredient for breakfast porridge.  In Mexico, a favorite treat is dulce de alegria (“alegria” is the Spanish word for joy), a sweet candy-like confection made from popped amaranth mixed with sugar or honey.  A true Mexican Día de Muertos or Day of the Dead celebration will have an amaranth seed skull.  Amaranth can also be eaten straight up.  Its ﬂavor runs from light and nutty to lively and peppery, making it a popular ingredient in cereals, breads, muﬃns, crackers, and pancakes.

Three Reasons to Add Amaranth to Your Diet

Besides being incredibly versatile, this nutritious grain is naturally gluten-free and rich in protein, fiber, micronutrients and antioxidants. Amaranth contains more than three times the average amount of calcium and is also high in iron, magnesium, phosphorus, and potassium.  It’s also the only grain that contains Vitamin C.

There are three very important reasons to add amaranth to your diet:

Cooking amaranth is very easy. Measure the grains and water, boil the water, add the grains, gently boil with the occasional stir for 15-20 minutes, drain, rinse, and enjoy!  Cooked amaranth behaves a little diﬀerently than other whole grains.  It never loses its crunch completely, but rather softens on the inside while maintaining enough outer integrity so that the grains seem to pop between your teeth.  The cooked grains can be spread on a plate or other ﬂat surface to dry a bit, then sprinkled on salads, added to cookie batters, or stirred into soups.

There’s only one rule to follow when cooking up a batch of plain amaranth – don’t skimp on the water!  Add 6 cups of water for every one cup of amaranth.

When preparing amaranth, some recommend soaking amaranth at least 8 hours (up to 24) to unlock the nutrients and to help it aid in digestion.

For those participating in our Fall CSA, we hope you enjoy exploring and creating some recipes with amaranth!

Walked right into a web like this in the morning!

Passing some suns on my morning walk…🌻

SUNRISE☀️….a fresh start to a new day, new a

Passing some suns on my morning walk…🌻
… See MoreSee Less